Skip to content
I’ve recently been reading through Dyvers 2014 Great Blog Roll Call and was very pleasantly surprised to see this blog mentioned in the list, i’ve quoted the entry below for convenience:

An enjoyable blog that has recently begun to focus more on an AV aspect of blogging than on a written one. An interesting blog all the same.

I especially found it interesting the mention of an increased focus on the AV aspect of blogging rather than the written one; this was something that seems to have crept up on me gradually (and without me really thinking about it) as the games that I was writing about originally wrapped up and I started playing more online games. Since the online games were normally recorded anyway it seemed logical to make videos about them rather than write a lot of stuff about them (session reports aside); i’ve always been a believer that you can take something positive out of almost any feedback so I looked back over the blog and, having been made aware of it, I think that the author of the Roll Call was correct, all of my blog entries recently had been links to videos or session reports.
This was something that i’d not really considered up until it was mentioned, however, now that I am aware of it I plan to do something about it; my Youtube channel (which I enjoy very much and will be continuing to support) receives at least one video uploaded per week (assuming no accidents or real-life emergencies), normally on a Wednesday, going forward it is my intent to do the same for my written blog, designating Wednesday evenings firmly as blog & video evenings. Of course i’ll still be linking to videos in the blog but I wouldn’t want to abandon the written aspect of blogging since I find it gives me a different sort of enjoyment to creating videos and is also something I can do whilst sat downstairs whereas videos have to be set up to have minimal background noise, lighting, etc.

Also I have a new game starting this weekend, a Dungeon World game set in the Dark Sun campaign setting (or at least something based loosely on it, since a large part of Dungeon World’s enjoyment comes from finding out about the setting as you play) so expect some blog entries about that shortly 🙂

Many thanks to Charles Atkins author of the Dyvers 2014 Great Blog Roll Call for his kind words about the blog and for bringing to light something that had escaped my notice, I hope to use the feedback to see my blog (and Youtube channel) go from strength to strength. 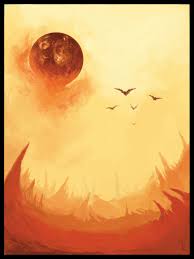